No terrariums.  No myths.  No nonsense.
Get the straight facts from guys who grow and propagate thousands of carnivorous plants every year.

Sarracenia, the American pitcher plants, are native to the US Gulf Coast states and all along the East Coast, from Eastern Texas through to Florida, and north through the New England states and the Southern provinces of Canada. There is even one natural population in extreme east British Columbia! These plants get their name from their pitcher-shaped leaves. They capture insects by producing nectar along the rim of their pitchers. When an insect starts to lick up the nectar, it tries to get more by reaching in the pitcher. When it loses its footing, it falls right in!

The inside walls of the pitcher are very smooth, so insects are not able to crawl out. They also can't fly out because there isn't any airlift in a tube! Eventually the insect dies, and as it decomposes, the plant absorbs its nutrients right through its leaves. Mmm....

Where to Grow
Sarracenia grow best outdoors as a container or potted plant on a sunny deck or patio. You may also grow them in a pond or fountain, but keep their crowns above water. Because of their specific soil requirements, avoid planting them directly into the ground.

Sunlight
During the growing season, grow your Sarracenia outside in full sun with 6 or more hours of direct sunlight, for vigorous growth. If full sun is not possible, provide a minimum of 4 hours of direct sunlight with bright indirect light during the rest of the day. Such a plant won’t be as vibrantly colored as one grown in full sun, but they can still grow more/less healthily.

Heat Tolerance
Sarracenia tolerate the summer heat well. They originate from an area where temperatures above 90°F (32°C) commonly occur in summer. 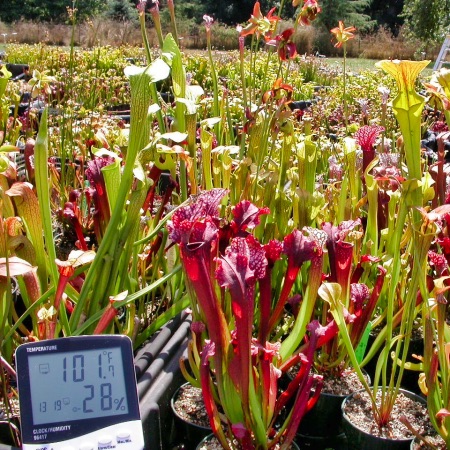 At our nursery in Oregon, our plants are well accustomed to hot dry summers.
On occasion, our relative humidity drops as low as 12%.

Water
Sarracenia require mineral-free water. If your tap water is relatively pure (less than 50 parts per million in dissolved minerals), then you can safely water your Sarracenia with it. Otherwise, use bottled distilled water. Keep the soil wet at all times. You can do this by setting the plant in small amounts of standing water, no more than halfway up the pot.

Soil
Use a soil mixture of 1 part peat moss and 1 part perlite. Never use potting soil, compost or fertilizer; these ingredients will kill your plants.

Winter Care
Sarracenia require 3-4 months of winter dormancy triggered by cold temperatures (below 50°F or 10°C) and shorter daylight hours. As your plants enter dormancy, they will stop growing altogether. Some plants will retain their pitchers into winter, but many leaves will turn brown. While dormant, your plants can withstand overnight frosts down to 20°F (-7°C). As long as temperatures rise above freezing during the day, you don't need to protect them. However, even while dormant, plants will still need to sit in a small amount of standing water to prevent their soil from drying out.

If you live in zones 7 and 8, pay attention to weather alerts. If weather forecasts predict the daytime temperature will remain below freezing for more than a couple of days, you will need to protect your plants from frost burn, a type of dehydration that occurs during prolonged freezes. Cover your plants with tarp (or move them to an unheated enclosure). When the daytime temperature rises above freezing, you may uncover your plants and allow it to continue its dormancy as usual.

If you live in zones 6 or colder, areas where the temperature routinely drops below freezing for more than a week at a time, you will need to mulch your container plants for the winter. Maintain soil moisture whenever the temperature rises above freezing. Uncover your plants in early spring. 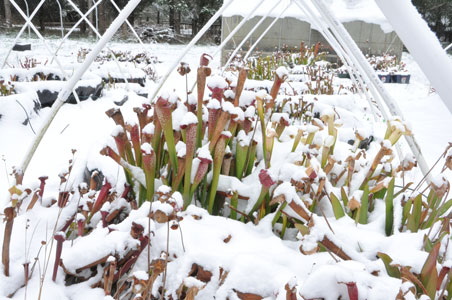 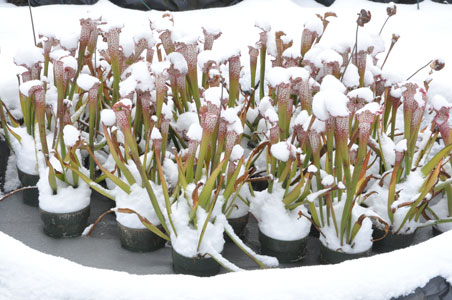 Our nursery is in USDA zone 8. We experience temperatures as low as 10°F (-12°C).
It is not at all unusual for these plants to experience snow and ice.

THE ULTIMATE CARNIVOROUS PLANT GUIDE FOR BEGINNERS
In this downloadable ebook, Jacob Farin, co-owner of Sarracenia Northwest, will show you how to think like a professional carnivorous plant grower and keep your first carnivorous plant alive and healthy. You will learn:

If you are new to carnivorous plants or have struggled to keep them alive, this ebook is for you. Download your copy today!

Be inspired! Get monthly growing tips and updates when seasonal plants are back in stock!